A trend line in technical analysis is formed when you can draw a diagonal line between two or more price pivot points. They are commonly used to judge entry and exit investment timing when trading securities. It can also be referred to a dutch line as it was first used in Holland. 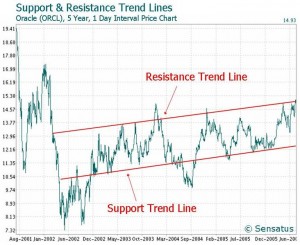 A support level is a price level where the price tends to find support as it is going down. This means the price is more likely to “bounce” off this level rather than break through it. However, once the price has passed this level, by an amount exceeding some noise, it is likely to continue dropping until it finds another support level.

Trend lines are a simple and widely used technical analysis approach to judging entry and exit investment timing. To establish a trend line historical data, typically presented in the format of a chart such as the above price chart, is required. Historically, trend lines have been drawn by hand on paper charts, but it is now more common to use charting software that enables trend lines to be drawn on computer-based charts. There are some charting software tools that will automatically generate trend lines, however, most traders prefer to draw their own trend lines.

However, time periods can also be viewed in terms of years. For example, below is a chart of the S&P 500 since the earliest data point until April 2008. Please note that while the Oracle example above uses a linear scale of price changes, long term data is more often viewed as logarithmic: e.g. the changes are really an attempt to approximate percentage changes than pure numerical value.

This chart from 1950 to about 1990, showing how linear scale obscures details by compressing the data.

Trend lines are used in many ways by technical analysis traders. If a stock price is moving between support and resistance trend lines, then a basic investment strategy commonly used by traders, is to buy a stock at support and sell at resistance, then short at resistance and cover the short at support. The logic behind this is that when the price returns to an existing principal trend line it may be an opportunity to open new positions in the direction of the trend, in the belief that the trend line will hold and the trend will continue further. A second way is that when price action breaks through the principal trend line of an existing trend, it is evidence that the trend may be going to fail, and a technical analysis trader may consider trading in the opposite direction to the existing trend, or exiting positions in the direction of the trend.