The Head and Shoulders formation is one of the most well known reversal patterns.

On the technical analysis chart, when a price trend is in the process of reversal either from a bullish or bearish trend, a characteristic pattern takes shape and is recognized as reversal formation.
Formations 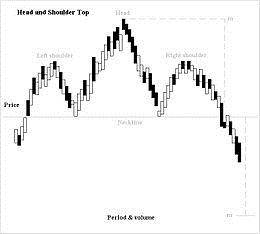 This formation is simply the inverse of a Head and Shoulders Top and often indicates a change in the trend and the sentiment. The formation is upside down in which volume pattern is different than a 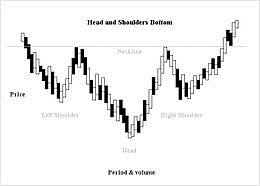 Head and Shoulder Top. Prices move up from first low with increase volume up to a level to complete the left shoulder formation and then falls down to a new low. It follows by a recovery move that is marked by somewhat more volume than seen before to complete the head formation. A corrective reaction on low volume occurs to start formation of the right shoulder and then a sharp move up that must be on quite heavy volume breaks though the neckline.

Another difference between the Head and Shoulders Top and Bottom is that the Top Formations are completed in a few weeks, whereas a Major Bottom (Left, right shoulder or the head) usually takes a longer, and as observed, may prolong for a period of several months or sometimes more than a year.
Importance of neckline

The drawn neckline of the pattern represents a support level, and assumption cannot be taken that the Head and Shoulder formation is completed unless it is broken and such breakthrough may happen to be on more volume or may not be. The breakthrough should not be observed carelessly. A serious situation can occur if such a break is more than three to four percent.

When a stock drifts through the neckline on small volume, there may be a wave up, although it is not certain, but it is observed, the rally normally does not cross the general level of the Neckline and before selling pressure increases, the steep decline occurs and prices tumble with greater volume.

Usage as a tool

If the price advance preceding the Head and Shoulders top is not long, the subsequent price fall after its completion may be small as well.

Next, Lesson 5 – how to trade with Double top / bottom method